in the midst of mommying, studying, waiting tables, and dealing with the chaos that cancer unleashes on a family, i am finally starting to seriously revamp this little blog-home of mine. i'm going to be playing around with new designs/color/templates, so it might look a little funky (or downright ghastly) for a few days, but have faith. slowly but surely things are evolving.

i'm not sure if anyone still visits my dusty little blog.

after all, it's been two years and some change since i last posted.

and i'm itching to reconnect and create and write. so, here i am.

i can't help but smile at the thought that i'm finally sitting down and writing this post. fine-uh-LEE!

so, if you're still out there: hi :).  i hope you still want to tag along with me on my (super weird) journey. stay tuned for some fucking debauchery and a lot of catching up. 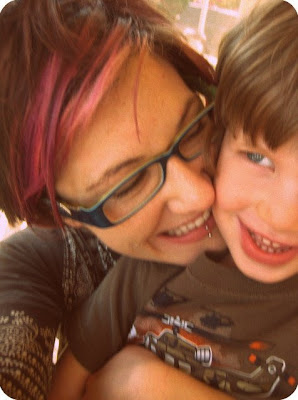 you are the brightest little firefly in my jar. 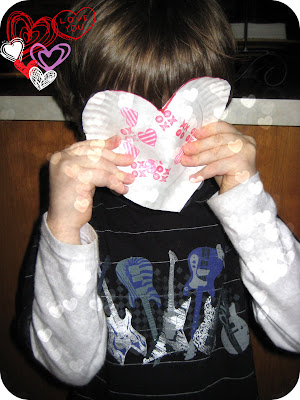 you know it's monday when...

every single electrical outlet in your kitchen fails to work. so you walk around your house, carrying the coffee maker like a desperate fiend, trying to find an outlet that will pity you.
i love mondays!
Posted at 6:24 AM 6 comments:

ahhhh, life. so full of mysteries. life is riddled with timeless questions, questions that have plagued the collective human mind for centuries. you know, questions like: why are we here? what is the meaning of this thing called life? is reality just a dream? does god exist? what came first, the chicken or the egg? who is my secret santa? who stole the cookies from the cookie jar? who let the dogs out? why the hell do moms attack other moms over stupid shit that's really none of their business? and why the fuck am i always the one who brings the veggie tray to the potluck/party?


while i can't claim to have any definitive answers to these questions, i do have some opinions to share (i know, you're surprised).

oh wait, i do have one definitive answer to one of those questions. "who stole the cookies from the cookie jar?", you ask? it was probably the bulimic girl. just a guess. (i would know, i used to be one. i ate a shitload of cookies. just sayin'. :::shrug:::) 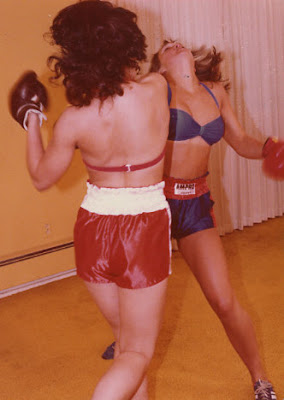 why the hell women can't seem to stop attacking one another for trivial shit is beyond me. i'm sure i'm not spewing any words of wisdom here when i say that being a mom is the hardest job anyone could ever undertake. neuroscience? heart surgery? PSHHHHH. CAKE compared to being a mom (here i am reminded of a wonderful gem of a lyric by my dear friend, lil wayne: "i got cake like everyday my birthday". werd. stay gangsta.)

as i said, being a mom is a damn hard job. so here's a radical idea: how about we all support one another and encourage one another instead of cutting one another down for personal lifestyle choices, parenting styles, and other decisions that are really no one else's business? my favorite mommy wars battles are "the formula feeders vs. the breast milk moms" and "the anti-vax moms vs. the pro-vax moms". i'm all for sharing information. i'm certainly behind voicing your opinion, LOUD AND CLEAR. but is it necessary to verbally massacre a working mom who chooses to formula feed because that fits her lifestyle? or because she just doesn't want to breast feed? i have seen hardcore breast baby moms publicly humiliate formula feeding moms over this. i don't think that's necessary, productive, or anyone's business but the mom's and the baby's.  and if you get bitch slapped or sucker punched for acting like a first class penis wrinkle, i won't feel sorry for you. you asked for that by vomiting your unsolicited advice/opinion (read: attack) on another mom.

and OH FUCK ME, the vax wars. listen, i don't care what you do. vaccinate, don't vaccinate, partially vaccinate -- it's all good in my book. just do your research, make an informed decision, and stick to your guns. and for the love of god, don't attack the other mom who chose to do something different with her kids. this is SUCH a personal decision and there is compelling research in support of both sides. sometimes you have to agree to disagree and just walk away. unless the other mom directly asks for your opinion, don't flame her. just shut the fuck up. 'cause you're being an ass.

there are a few exceptions to this rule. some mommies are kind of...well, creepy. like the ones who push their political views on their children and don't allow them to form their own opinions. these moms are creeptastic in a big way. exhibit A: the right wing parenting fail. there's no excuse for that shit. sorry. right wing, left wing, no wing, whatever. i love you all. just don't be a dumbass.

i'll admit it: i can't cook. or bake. and i don't want to poison you by attempting either of those grand feats (well, if i'm being honest, there may be a few of you i'd like to poison).
that's all i have to say about that. for now.
hey, the next post will be filled with christmas cheer!
oh. one more thing. my lovely girl left of lost allowed me to grace her gorgeous blog with a guest post today! her blog is beautiful, and quite frankly SHE is beautiful. so get check out my guest post and the rest of her fabulous blog at a little left of lost. 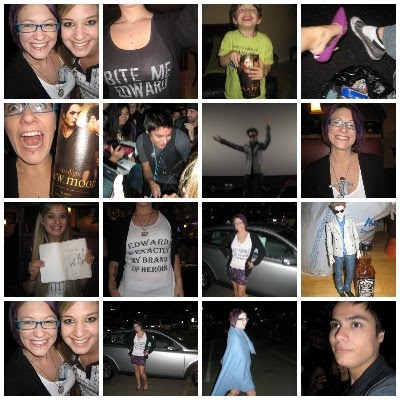 if you look closely, you'll see pocket edward hanging out in my boobies!

so, as the title implies, i've seen new moon a total of three times so far.

let me start out by saying, this movie elicits several involuntary reactions from me, the first of which is moaning like a sex-crazed girl on the verge of bliss. that infamous "here comes robward (aka sex on legs) stalking towards you from his volvo in the high school parking lot" scene, it gets me every time. it got me all three times, to be more specific. i even tried stuffing a sock in my mouth for the third viewing. oddly enough, i think the sock only amplified my lusty moans. *shrug* what can i say? i know what i like, and i'm vocal about it. brazen hussy, remember? ;)

the premiere event in surprise, az (hosted by twifans.com and cullen boys anonymous) was banana-sandwich-crazy! apparently there were about 3,000 twihards in attendance. they had trivia, raffles, little gift bags, and they also arranged for kiowa gordon (who plays embry call, one of the wolfpack schmexies) to hang out at the theatre with 3,000 of his closest (boobie sporting) friends.


jeni and i just happened to be standing on the edge of the red carpet when kiowa arrived, and HOLY SHIT if i didn't almost cut a bitch (or like 10 bitches). within seconds of his arrival, there were elbows in my ribs, hands in my face, and blood pouring out of my ears as a hungry pack of hormonal female wildebeests shoved and screeched. those bitches were fierce. luckily, we didn't have to resort to violence and we also got to chat with kiowa for a minute as he stopped and signed our books and posed for pictures.

now, let's get something straight: kiowa is pretty. but not as pretty as rob (sorry dawg).

my second brush with kiowa was when we were seated in our theatre, waiting for the movie to start, and kiowa and his entourage (his brothers, one of which was kind of an ASSHAT) came into each theatre to intro the movie. jeni and i happened to be sitting in the row directly in front of where he stood to speak. at the end of his mini-speech, when the crowd was still quiet, i busted out with a LOUD "TEAM EDWARD!" to which kiowa responded by looking me straight in the eye and declaring, "EDWARD SUCKS! TEAM WOLFPACK!".

i suppose i should rewind a bit and tell you how i ended up walking out of the theatre in a blanket. said blanket, who now lives on my bed, is very warm, very fuzzy, and came into my life pre-new-moon-screening that evening. how, you ask? well, the american red cross was on location at the premiere taking blood donations as part of the whole "vampire" theme. very clever, i must say. two points for you, american red cross, for cashing in on the twilight fever!

anyway, jeni and i decided to sign up and give blood. because we're really nice. well, jeni is nice. i'm kind of a bitch ;). anyway, all was swell for the first 10 minutes of the blood sucking procedure. i was chillaxin, talking to jeni, making friends, groovin' to the music, etc. all of a sudden, it hit me, out of fucking nowhere, i knew i was going to pass out. i was about 5 seconds away from passing out and there was not a damn thing i could do about it because, OH YEAH, this blasted fucking needle is sucking all of the blood out of my body! suddenly, i was feeling very selfish and decided i definitely needed my blood. ALL OF IT.

the american red cross blood suckers (who were very sweet, and kind of hilarious) immediately noticed that i was in a bit of trouble. i vaguely remember three or four them slapping ice cold towels on my chest and forehead, calling me "sweetie" repeatedly, pep talking me like i was giving birth, and blasting arctic temperature air directly at my face (they have these really convenient AC vents in the ceiling of the bus).

eventually i started to come back around, and since i was down a full pint of blood and still on the brink of unconsciousness, i was sorta fucking freezing. my teeth were chattering. in an obnoxiously loud manner.

that's when the fuzzy blue american red cross blanket and i became best buds. not only did i leave that donation bus with a purse full of snacks (nutter butters, oreos, and other generally unhealthy items), but i got a blanket out of the deal.

we donated blood BEFORE the movie, so i was fucking freezing for the entire film, and huddled in my blanket (looking like a psycho, no doubt). jeni snapped that lovely picture of me in said blue blanket on our way back to the car, post-new-moon-premiere, during which my teeth resumed their obnoxious chattering.

despite losing a pint of blood and probably chipping a few teeth from the violent teeth chattering, i still rocked those purple patent leather heels like a fucking champ ;).

also, pocket edward was in my boobies for a running total of 10 hours, so overall i'd say it was a "win" evening. especially for my boobies!
Posted at 11:32 PM 5 comments: